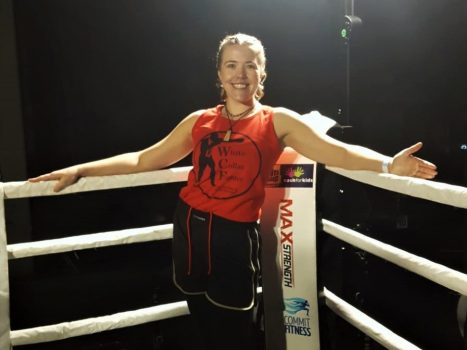 We’re celebrating International Women’s Day 2020 by celebrating a couple of the incredible women in the Greatdays office.

This is Michelle’s story:

I started boxing at the end of 2019. I’d boxed a little as a kid but nothing serious, so when I signed up with White Collar Fighter for a charity match that was just 10 weeks away, I knew I was in for a challenge.

I’d spent 10 years travelling, living in Canada and New Zealand and moving around a lot and wanted to keep up my spirit of adventure. I had a list of things I’d never done before – things I wanted to see how I’d handle as they pushed my boundaries. Top of that list was boxing.

There’s something pretty amazing about knowing how you react to being punched. To get past my fear, I asked my trainer to punch me in the face and not hold back. I burst into tears and freaked him out. It worked though, I wasn’t afraid after that – literally rolling with the punches.

Training was intense. I’d built up my fitness beforehand as I didn’t want to get caught out. I started with pads twice a week as well as my own sessions running and doing weights. I started running in November and by December I’d run my first ever 10k.

It was nothing compared to the diet though. I stopped drinking completely – including over Christmas and New Year – and cleaned up my eating.

I did fall off the wagon a little just before the fight. I’d be training so hard and suddenly got sick out of nowhere. I hated not being able to train and felt I was falling further behind each day. I put a lot of pressure on myself and it didn’t really help.

My nerves peaked about two days before the fight when I found out who I was going into the ring with. They’d paired me with a really experienced, powerful fighter going for a belt.

But when the day of the fight came, the nerves disappeared. I realised I’d done all I could. That morning I went for a swim and got my hair braided – my friends and family were far more nervous than I was.

I just wanted to enjoy the evening once it arrived. I took my walk out really slow and really made the most of it. I stood next to my opponent feeling really confident and I could feel her nerves. It helped – the more nervous she seemed, the less nervous I felt.

We touched gloves and I tried to catch her eye but she avoided my look. The bell went and I got a good early punch in but she came back really strongly. She absolutely nailed me in the first round.

I pulled it back though and got a lot of points for aggression and pushing the fight where I wanted it to go. After that it was pretty tight.

I lost the fight on points – I think my defending let me down – but I wasn’t sad. I’d put up a great fight and the fact I’d even been paired with someone of her quality was a massive achievement.

I’d raised £770 for Manchester Cares too, which was more than enough consolation. I wanted to work with a smaller local charity and they fight loneliness in the community by bringing young professionals and older people together.

I’m going to be raising money for Manchester Cares again with a Stars in Your Eyes event where other people will be pushing their boundaries and I’ll be like the ringleader.

Next on my list is illustrating a kids book I’ve written and I’m running a half marathon. Oh, and scariest of all I’m looking to buy a house and get a dog.

I want to keep boxing so I’m keeping my fitness up ready for my next bout, that way I can focus more on technique. There’s no way I’m going out on a loss!

Not done celebrating our inspirational women? Check out Sarah’s story too! 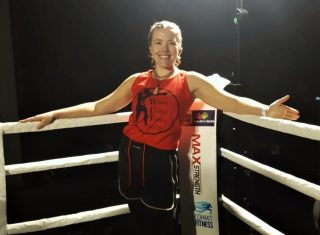