Legends of the Force: A Celebration of Star Wars™

Legends of the Force: A Celebration of Star Wars™ returns from 11th January – 15th March 2020!

Legends of the Force: A Celebration of Star Wars™ ©Disney ™Lucasfilm Ltd.

Returning on 11th January 2020, live the most epic of adventures as Legends of the Force: A Celebration of Star Wars™, takes over Disneyland® Paris.

Get ready to blast off to a galaxy far, far away then experience breathtaking shows, jaw-dropping attractions and unforgettable Star Wars™ character encounters that will propel you into your very own Star Wars™ story. This is an out-of-this-world adventure!

Prepare to feel the full power of the force come to life! This is truly a journey that no Jedi would ever want to miss!

With the rise of a legend, the Force has never been stronger.

Star Wars™ : A Galactic Celebration Show
The most spectacular show in the galaxy. Lift off and relive the Star Wars™ saga’s most meteoric moments in this night-time extravaganza. Feel the Force as the night’s sky above Walt Disney Studios® Park erupts to life with iconic sights and sounds starring the likes of Luke, Anakin Skywalker and Obi-Wan Kenobi. 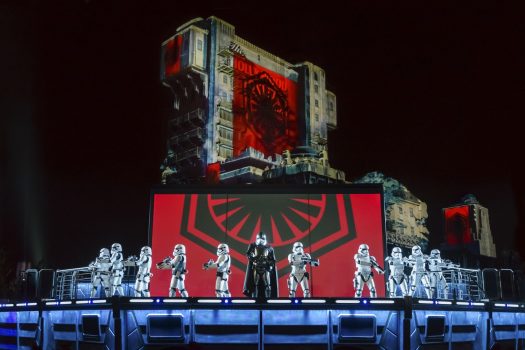 Stand Proud when you Encounter the Legendary Chewbacca
Have your widest smile ready for an unforgettable encounter with one of the Star Wars™ saga’s most legendary warriors – the roaring Wookiee, Chewbacca.

Face the Fury of the Darth Vader & Stormtroopers Imperial March
Witness a daunting display of Imperial power as Darth Vader himself leads a company of stormtroopers on a faultless military march right before your very eyes.

Behold a Dazzling Display in Legends of a Galaxy Far, Far Away
The Force has never been stronger with this incredible daytime stage show ignited by stunning scenes from the Skywalker saga, and starring legendary Characters, such as Chewbacca, BB-8, Kylo Ren and Rey.

Legends of A Galaxy Far, Far Away ©Disney ™Lucasfilm Ltd.

Stand back and witness for yourself the striking stature of Captain Phasma directing a battalion of stormtroopers through a legendary demonstration of galactic might.

Check into Starport and prepare to meet the most infamous Skywalker of them all, the dreaded Dark Lord of the Sith, Darth Vader. 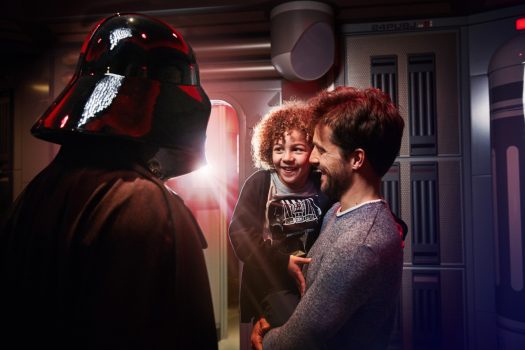 Are you the Rebel the Stormtroopers Patrol is looking for?

You better keep a cool head, have your papers ready and get your story straight because the most feared soldiers in the galaxy, the Empire’s stormtroopers are patrolling the streets, hunting for Rebel spies.

Board your Rebel Alliance vessel and prepare to play your part in a legendary, breathtaking battle with an Imperial Star Destroyer. Buckle up and brace yourself for a frenzy of blaster fire as one of the most ominous sounds in the Star Wars™ saga approaches – the whir of TIE fighters.

*Star Wars™ Hyperspace Mountain is available all year round at Disneyland® Park.

Buckle up in your Starspeeder 1000 and embark on an eye-popping 3D adventure through the most iconic planets from the Star Wars™ saga. With so many missions combinations, every trip is unique and sure to amaze the most devout Jedi.

*Star Tours: The Adventure Continues is available all year round at Disneyland® Park.

Don’t miss out on Legends of the Force: A Celebration of Star Wars™!

*All shows, parades and attractions are subject to change without prior notice due to inclement weather or technical difficulties.© Disney © ™ Lucasfilm Ltd.

Getting in touch by telephone

Due to the current COVID-19 crisis our telephone lines are open Monday to Friday from 10am to 2pm. Outside these hours please leave a voice message and we will respond as soon as possible.

We have staff working remotely and welcome new enquiries for 2021/2022. Please e-mail sales@greatdays.co.uk or telephone the office and we will get back to you as soon as possible.

Group travel and coach tours can go ahead!

If it is possible to ensure that groups of more than six do not mingle on a tour, coach tours of over six people on the coach can go ahead. People must stay in their groups of up to six (or larger if they are from one household) on all parts of the tour – for example whilst in hospitality settings and when visiting attractions as well as whilst on the coach.

Legislation does not place any capacity constraints on public transport services, private hire vehicles or leisure tours. Operators should continue to provide Covid-secure transport services which can accommodate multiple groups of six people.

We have staff working remotely with access to e-mail, so if you have any questions about upcoming tours or need to get in touch with us, please e-mail sales@greatdays.co.uk and we will get back to you as soon as possible. We will be contacting you 2 weeks prior to the contracted cancellation deadline to review the tour and discuss any operational queries you may have.

We thank you for your support and understanding during this turbulent time.