Group Travel Tour Operator for holidays to the Italian Riviera

The Italian Riviera of Flowers – Mediterranean Coast and Flower Gardens

Considered to have the most beautiful coastline in Europe, curving around the Mediterranean from Tuscany in the east to the French border in the west, the Italian Riviera of Flowers is home to some of Europe’s most stunning gardens, many created by English gentry during the 19th and early 20th centuries.

Based in the charming Italian coastal resort of Diano Marina, experience traditional Italian hospitality on the shores of the Med. What’s more, from here, not only can you discover much in Italy, but the sights of the French Cote d’Azure, including Nice, Grasse, St Paul de Vence and Monte Carlo, the playground of the rich and famous, are just over an hour’s drive away.

San Remo; The Gem on the Italian Riviera of Flowers

While exploring this beautiful coast, visit San Remo. Exploring the Old Town, be sure to make a stop at the Russian Orthodox Church which boasts a truly spectacular dome. The town is famous for a host of local villas including Villa Zirio, former residence of German Emperor William III, Palazzo Bellvue, Villa Ormond, a French style botanical garden and Villa Nobel, the final home of Swedish scientist, Alfred Nobel and its famous flower market. Also, why not visit the exotic Pallanca Garden in Bordighera, whose plant-covered terraces sweep down to the sea, boasts over 3,000 species of plants and has one of Europe’s most important collections of cacti.

Discover beautiful hilltop gardens, with fantastic arrays of flora and fauna nestled between quaint and historic coastal towns. The pastel shades of the buildings complement the striking blue of the skies and Mediterranean – its easy to see why the coast gets its name of the Cote d’Azur or Costa Azzura!

This area makes a great base for the Nice Carnival and Menton Lemon Festival.

Arrive and check in to your hotel.  If time allows, begin exploring the area.

San Remo is one of the larger towns on this stretch of the coast. The town is famous for a host of local villas including Villa Zirio, former residence of German Emperor William III, Palazzo Bellvue, Villa Ormond, a French style botanical garden and Villa Nobel, the final home of Swedish scientist, Alfred Nobel (no entrances included) and its famous flower market.

Discover the historic San Siro Cathedral, marvel at the ornate churches or take a leisurely stroll along the beachside promenade. Covering the path of the old train line and recently converted for pedestrians and cyclists alike, it affords unrivalled views of the stunning coastline. The exotic Pallanca Garden in Bordighera (entrance not included), whose plant-covered terraces sweep down to the sea, boasts over 3,000 species of plants and has one of Europe’s most important collections of cacti.

Discover one of Europe’s smallest countries in Monte Carlo. Nestled in a cove along the cost close to the French/Italian border, it is the home of the rich and famous. Base for the iconic Grand Prix, there is much more to see and discover in Monaco. Perhaps enjoy a guided tour to explore the historic cliff-top old town, where you will discover the beautiful Exotic Garden, overlooking the sea is home to thousands of giant sized cacti, thanks to the area’s exceptional climate, as well as many sculptures and works of art. There is also the Royal Palace and Cathedral and quaint streets far removed from the famous Casino and port.

Ventimiglia is the end of the line in Italy before crossing the border to France. Lying on the border, it became famous for its markets for which many French locals and tourists cross the border each week. Friday is Ventimiglia’s market day and you can find many bargains at the famous markets, running the length of the town and sea front.

Hanbury Gardens, an 18 hectare garden created in 1867 by Sir Thomas Hanbury, lies at the edge of town. It has many specimens collected on his world travels. It includes a perfume garden, a Japanese garden and a succulent garden, all overlooking the Mediterranean. If time permits, visit the Maria Serena Villa, known as ‘Little Africa’. Once a presidential residence, the villa is in a lush green setting by the sea and has a beautiful collection of palm trees and tropical plants.

Head over the border to the nearby French Riviera. Nice, the standout city on the coast offers much to visitors. In the atmospheric old town of Nice, you will find the Cours Saleya flower market, one of the most popular markets on the French Riviera. The Parc Floral has the largest greenhouse in Europe and the Botanical Gardens are also interesting. Walk along the famous seafront Promenade des Anglais and take in the beautiful Baie des Anges. Enjoy a drink in Place Garibaldi or hit the shops in the pedestrianised city centre zone.

A short drive away is the charming village and cove of Villefranche, with its pastel shaded houses overlooking the quaint cove and over to the headland of Cap Ferrat, home of the rich and famous, inlcuding Elton John. The fantastic Villa Ephrussi de Rothschild in Cap Ferrat is located on one of the most spectacular areas of the French Riviera. The Villa has nine gardens facing the sea with lakes, fountains and a magnificent art collection.

Boasting one of the best town beaches anywhere in Italy and with a promenade that overlooks the beach, Alassio has drawn visitors for hundreds of years with a strong British heritage. The old town features narrow streets lined with clothes shops, gelaterias and bookshops.

Time permitting, enjoy some final sightseeing or buy some last minute before saying ciao to the Italian Riviera.

Located directly on the seafront overlooking the bay of Diano Marina. This small hotel has been completely refurbished and offers all modern comforts. 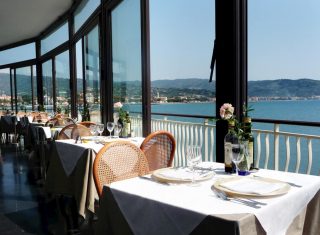 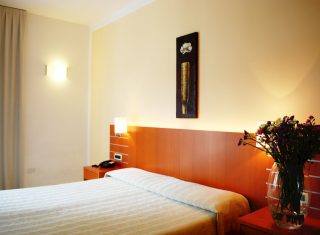 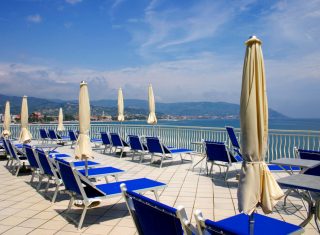 Centrally located, with a private beach. The hotel has a restaurant with terrace overlooking the bay, bar and outdoor pool. 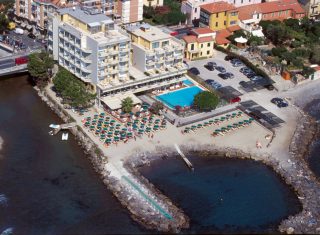 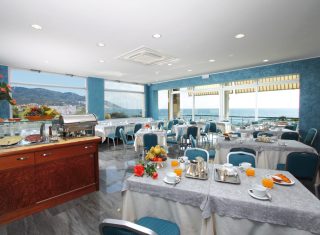 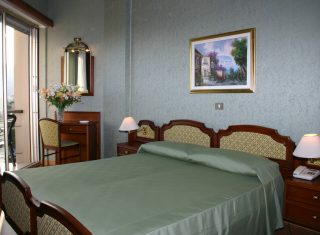 Located close to the historical centre and the port. Facilities include a bar, lounge, pool, wellness centre, garden, terrace, restaurant and seasonal entertainment.

Christmas on the Italian Riviera

City tax – A local city tax is payable per passenger per night directly to the hotel.

Price based on exchange rate of £1.00 = €1.176. All prices are per person based on sharing a double or twin room and with one free place in a single room, based on a minimum 25 full fare paying passengers. Prices do not include UK coach hire or travel insurance. Dates are subject to availability. Smaller groups can be quoted for on request. Greatdays Holidays Limited is a member of ABTA (Y0380) which means you have the benefit of ABTA's assistance and Code of Conduct. Please ask us to confirm what protection may apply to your booking. Greatdays Holidays Limited has an ATOL licence (4279) and all of our air package tours are protected under this licence. In the unlikely event of our insolvency, the Civil Aviation Authority will ensure that you are not stranded abroad and will arrange to refund any monies you have paid to us for an advance booking. All the flights and flight-inclusive holidays on this tour are financially protected by the ATOL scheme. When you pay you will be supplied with an ATOL Certificate. Please ask for it and check to ensure that everything you booked (flights, hotels and other services) is listed on it. Please see our booking conditions for further information or for more information about financial protection and the ATOL Certificate go to: www.atol.org.uk/ATOLCertificate. Our website policy is to use only copyright free images or images which have been authorised to us for free use by the owner. If you consider an image to be unauthorised or to be your property, please contact us immediately and if invalid we will have the image removed. If your image requires crediting or is missing a copyright statement then we will be pleased to add this to the webpage, contact us at info@greatdays.co.uk