Tried and Tested: Visit Lake Constance and stay in Friedrichshafen

Bordered by Germany, Switzerland and Austria, Lake Constance offers a treasure trove of spectacular landscapes. Combine that with a mild climate and an array of fascinating places to visit and it’s easy to see why it remains such a popular destination. During this tour, we visit the lake’s capital, Constance. We explore Mainau, the ‘Island of Flowers, discover the ‘Island Town’ of Lindau and visit the spectacular Rhine Falls.

Friedrichshafen is a wonderful base for your time on the Lake

This charming town is home to beautiful views and you also have good access to the many treasures found around the Lake. Take a stroll along the lakeside promenade, one of the longest on Lake Constance, with a magnificent view of the Alps, almost within touching distance across the water. Friedrichshafen has another claim to fame, as the birthplace of the Zeppelin airship. Whilst here, be sure to visit the engaging Zeppelin Museum. One of the museum’s highlight is a 33m reconstruction of the Hindenburg airship. Located in the striking former harbour station, tells the story of the remarkable aircraft. A highlight is a 33m-long reconstruction of the famous Hindenburg airship.

Built on a steep lakeside vineyard, with an imposing medieval fortress that looks over the town. The old town is simply enchanting. Nearby is the oldest castle in Germany: Salem Castle. It was originally a Cistercian monastery but it now houses several interesting museums, a wine cellar and café, all set in beautiful parkland. We take a passenger ferry for the 20-minute crossing to Mainau, the Island of Flowers. This tropical paradise is still owned by the noble Bernadotte family, the Swedish Royal family.

Another breathtaking excursion is to Europe’s largest waterfall. Cross into Switzerland to see the waters of the Rhine thundering and crashing. This is a phenomenal sight.

Perhaps, you’d like to see this stunning Lake from another angle and stay in Austria on our Lake Constance: One Lake, Four Countries tour.

Take a short sea crossing and travel towards Germany, stopping en route for an overnight stay. Be sure to take in those first views of Lake Constance as you arrive at your hotel in the German lakeside resort of Friedrichshafen.

We take to the water this morning as we enjoy a relaxing cruise to Lindau, the famous ‘Town on the Island’. Arriving by boat we see Lindau’s best-known attractions, the famous Bavarian Lions and 33m high lighthouse that stand guard at the entrance to the picturesque harbour. There’s time to wander into the medieval town centre and see the beautifully painted City Hall. We continue around the lake by coach to Bregenz to take a ride on a cable car to the summit of the Pfänder Mountain. The ride is memorable in itself, but the panoramic 360˚ views from the top of the lake and of the Alpine peaks of Germany, Switzerland and Austria are truly stunning.

At leisure in Friedrichshafen

Spend today relaxing in the hotel and exploring Friedrichshafen. Take a stroll along the lakeside promenade, one of the longest on Lake Constance, with a magnificent view of the Alps, almost within touching distance across the water. Friedrichshafen has another claim to fame, as the birthplace of the Zeppelin airship. The Zeppelin Museum, located in the striking former harbour station, tells the story of the remarkable aircraft. A highlight is a 33m-long reconstruction of the famous Hindenburg airship.

This morning we visit the picturesque town of Meersburg, built on a steep lakeside vineyard, with an imposing medieval fortress that looks over the town. We take a ferry across the lake to spend time in the historic town of Constance. The centre, with its narrow, winding streets, has changed little since the Middle Ages. Our day of discoveries takes us next to Mainau, the ‘Island of Flowers’. This tropical paradise park, still owned by the noble Bernadotte family, boasts a Butterfly House, Arboretum and Palm House, as well as Castle Mainau.

We take a scenic drive today following the northern shore of the lake before crossing into Switzerland to visit the mighty Rhine Falls, Europe’s largest waterfall. Stand high above the falls and feel the vibration of the water as it thunders below you. If you’re feeling brave, take a short ride by boat to the famous rock in the middle of the falls. There’s free time in the neighbouring medieval town of Schaffshausen before we return to the hotel.

It’s time to leave the lake and return to the UK. Stop for an overnight before taking a short sea crossing on day 8.

Centrally located between the railway station and the shores of Lake Constance. All rooms at the Seehotel are equipped with hairdryer, TV, telephone and air-conditioning. The restaurant offers regional and international cuisine. Coach parking is available in front of the hotel. 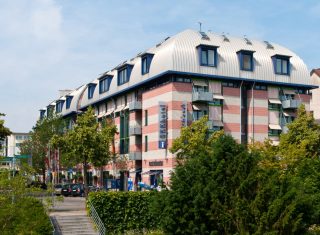 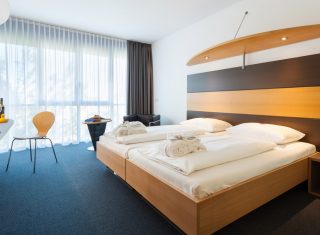 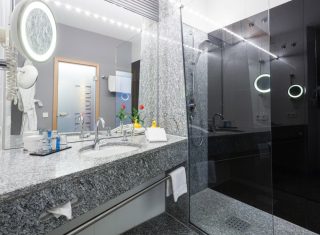 Centrally located and a 2 minute walk to the lake side promenade of Friedrichshafen. All rooms are equipped with satellite TV, minibar, seating area and a private bathroom with hairdryer. The hotel has a  bar, swimming pool, sauna and a terrace. Coach parking is a 5 minute walk from the hotel. 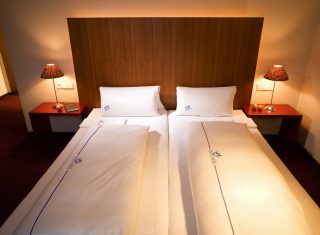 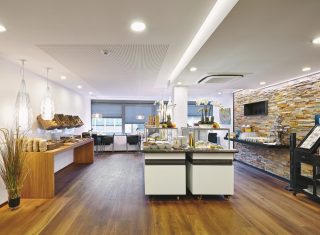 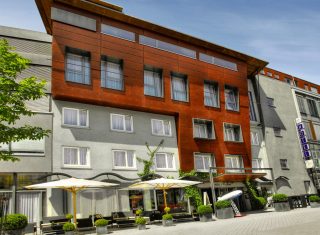 Lake Annecy and the French Alps

Prices also available on request for travel by air

Price based on exchange rate of £1.00 = €1.13. All prices are per person based on sharing a double or twin room and with one free place in a single room, based on a minimum 25 full fare paying passengers. Prices do not include UK coach hire or travel insurance. Dates are subject to availability. Smaller groups can be quoted for on request. Greatdays Holidays Limited is a member of ABTA (Y0380) which means you have the benefit of ABTA's assistance and Code of Conduct. Please ask us to confirm what protection may apply to your booking. Greatdays Holidays Limited has an ATOL licence (4279) and all of our air package tours are protected under this licence. In the unlikely event of our insolvency, the Civil Aviation Authority will ensure that you are not stranded abroad and will arrange to refund any monies you have paid to us for an advance booking. All the flights and flight-inclusive holidays on this tour are financially protected by the ATOL scheme. When you pay you will be supplied with an ATOL Certificate. Please ask for it and check to ensure that everything you booked (flights, hotels and other services) is listed on it. Please see our booking conditions for further information or for more information about financial protection and the ATOL Certificate go to: www.atol.org.uk/ATOLCertificate. Our website policy is to use only copyright free images or images which have been authorised to us for free use by the owner. If you consider an image to be unauthorised or to be your property, please contact us immediately and if invalid we will have the image removed. If your image requires crediting or is missing a copyright statement then we will be pleased to add this to the webpage, contact us at info@greatdays.co.uk