Turkey and Tinsel in the Scottish Borders

The Midlothian and Borders area of Scotland is easily accessible for group tours, stunningly scenic and rich in history. Optional excursions include Traquair House, New Lanark Mill and The Devil’s Porridge Museum.

Our cosy winter Turkey and Tinsel package at Tinto House Hotel features dinner each evening, including a Christmas dinner and Scottish Hogmany themed dinner. There is also a welcome drinks reception, live entertainment on three evenings, plus bingo and a quiz.

One of Scotland’s classic country houses. The slight musty aroma and off-set floors belie the history of Traquair House. Visitors including Mary Queen of Scots and Bonnie Prince Charlie set foot on the property during its time under Stuart ownership and experts believe its history reaches back much further than its first 1107 mention in records.

The house itself has remained largely unchanged since the 17th century but the modern site features a maze, a series of craft workshops and the tiny Bear Ale brewery.

The New Lanark Mills World Heritage Site features fascinating insight into the day-to-day life of mill workers with its recreated houses and working historic machinery. The on-site cafe and mill shop make this a great day out with the chance to take a bit of milling history home with you.

Sitting on the sparkling River Clyde, the mill village is only a stone’s throw away from the cascading waters of the Falls of Clyde, a tranquil place for a wander.

Set upon the site of the old HM Factory Gretna – built to address Britain’s First World War shell shortage and the largest munitions factory of its time – the Devil’s Porridge museum explores stories of the 12,000 women who travelled from across the UK to aid production.

It also tells the tales from the Solway Military Coast from WWII and later Cold War conflicts. The term Devil’s Porridge itself was coined by Sir Arthur Conan-Doyle after he witnessed firsthand the production of the volatile mixture used in the bombs.

Travel to your hotel – Christmas Eve

Arrive and settle into your room. Before dinner, meet some of your fellow guests at the Welcome Drinks Reception. A fantastic dinner will be served in the restaurant followed by live entertainment.

After a hearty full Scottish breakfast, collect your Jumbo Quiz forms from the hotel’s reception. Great fun and there will be a prize for the first correct completed entry. The winner will be announced on Thursday. In the evening, a delicious Christmas Dinner with all the trimmings will be served. Crackers, hats and streamers at the ready, followed by live entertainment.

Enjoy a full Scottish Breakfast before your day’s excursion. There is the option for your group to visit Traquair House or New Lanark Mill. Join us back at the hotel for dinner in the restaurant followed by bingo.

A full Scottish Breakfast will be served this morning, but make sure you have a good appetite this evening when a tantalising Scottish themed Dinner will be served in the restaurant. After dinner, you can dance the night away or simply sit and enjoy our live entertainment. The winner of the Jumbo Quiz will also be announced.

After a farewell breakfast we start our journey home. Why not call into The Devil’s Porridge Museum just north of the border in Eastriggs.

Nestled in five acres of stunning gardens within the breathtaking countryside of the Scottish Borders, this traditional country house hotel is the perfect setting for a holiday to remember.  Throughout Tinto Hotel, stunning architectural details, such as the majestic sweeping staircase with ornate stained-glass windows, and remarkable period pieces, like the penny farthing bicycle and grandfather clock, sit comfortably beside the numerous touches of tasteful modernisation. There are 40 comfortable and well-equipped bedrooms. The lounge is cosy and comfortable with soft seating. All tours will include 1 night’s entertainment (quiz, bingo or cabaret). There is no lift and 3 ground floor rooms, the rest of the bedrooms are located up 1 floor of stairs. 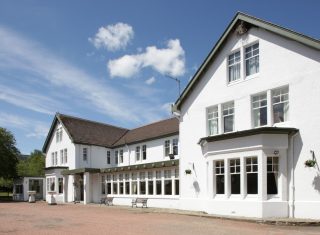 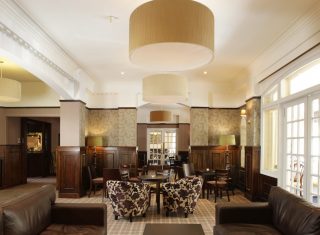 Turkey and Tinsel in Torquay

Turkey and Tinsel in Southport