Passion Plays are famous for depicting the Passion of Jesus Christ. The most famous, perhaps, is the Oberammergau Passion Play held in Germany every ten years. However, with Oberammergau now postponed until 2022, there is no better time than to see this incredible rendition of the Passion, brought to you towns folk of Sordevolo in Piedmont, Italy in 2021. Held every five years and has a cast of 400 locals and over 29 scenes depicting early Jerusalem, this incredible depiction is one of them most impressive and was written by Giuliano Dati dating back to the last years of the XV century.

Soredevolo and The Italian Passion Play

The history of this play can be dated back to Giuliano Dati, a Florentine bishop whose text was used to be performed on Good Friday in the Colosseum in Rome, with a large attendance of people, pilgrims, travellers and notables. The “Roman” passion text reached Sordevolo through somewhat mysterious ways and since 1816 the entire community of Sordevolo has been representing the Passion of Christ. The Passion of Sordevolo is certainly the greatest choral play ever performed in Italy by amateur actors: the performance takes place in a 4,000 square metres open space, a reconstructed corner of Jerusalem, dating back to 33 A.D including Herod’s Palace, Synedrium, Pontius Pilate’s Praetorium, the Garden of Gethsemane, the cenacle, the Calvary. The 3-hours performance consists of a prologue and 29 scenes, with an overall participation of about 400 actors and walk-on characters. With this tour we combine the Passion Play with the beautiful Piedmont region. Firstly staying in Biella before heading to the fascinating city of Acqui Terme.

Nestled in the north-western part of Italy, Piedmont (Piemonte in Italian) is surrounded by the Alps and is home to the city of Acqui Terme. Situated in the Monferrato hills along the banks of the Bormida river, and Acqui Terme is renowned for its amaretti cookies and the typical “baci” Acqui, the truffle and mushrooms, and the excellent Monferrato red wines. There is in the town one of the earliest spa industries and  offers fine thermal complexes which include mud baths and hot springs. During your stay, you will have plenty of time to explore the unique Piedmont region in Italy where the coexistence of gentle slopes, small glacial lakes, industrial cities and endless vineyards are in a plenty.

Asti and Monferrato; The Rolling hills and vineyards of North-West Italy

Home to the famous Asti Spumante, this region is full of delectable tipples for you to experience. Explore the history of the medieval town of Asti. Stroll along the arcaded streets and through the main square, Piazza Alfieri. Asti is a gem of Piedmont. Lesser known than other Italian cities, Asti has a century-long history and features a city-centre rich in medieval towers and noble palaces once owned by powerful banker families recognized for their power all over Europe. As well as this, discover the rolling hills of Monferrato, a unique region whose countryside is accented with plains of rich soil, and undulating hills divided by rivers and forests, set before the majestic backdrop of the Alps – the first Vineyard landscape to enter the UNESCO heritage list with Langhe and Roero.

In the heart of the Langhe, at the centre of a landscape of rolling hills and lush vineyards is the “capital”; Alba. The vine-striped Langhe Hills surround the gracious town of Alba and it is in the vineyards of the Langhe that fine wines of world renown, such as Barolo, Nebbiolo and Barbaresco, are produced. Explore this small town known as “the city of 100 Towers” before heading to La Morra and Barolo and visit a traditional wine cellar where our taste buds will rejoice tasting some classic wines and local products. Discover this and the many cultural flavours of Piedmont.

Turin; The Capital of Piedmont

Embark on a mission to find the city’s best chocolate with some tastings. This city is full of fascinating attractions, such as the Mole Antonelliana. Inside is the wonderful National Cinema Museum, which is definitely worth a visit. A glass lift whisks you up the centre of the building to a panoramic viewing platform. Turin is also the home of Juventus Football club and Fiat, so there’s something for everybody!

For an alternative tour to Sordevolo in 2021, combine the Passion Play with the magnificent Lake Maggiore.

Make your way to Italy either by air or by land and sea. Upon arrival, settle in at your hotel in the Biella area.

After breakfast, explore the city of Biella: Our tour guide will show you the cathedral and the 11th century Baptistery before taking the Funicular up to the medieval old town situated on top of Piazzo hill. Here you will walk through porticoes which are characteristic of this part of town and visit some of the old palaces and noble villas from whose gardens you will see panoramic views of lower Biella and its spectacular mountain range. In the afternoon we head to Lake Viverone – a small blue jewel in amidst the green woodland and fields of Piemonte. Afterwards, transfer to Sordevolo for dinner in a typical restaurant before the passion play performance.

Practically untouched by mass tourism, Monferrato is a unique region whose countryside is accented with soft, rolling hills, plains of rich soil, divided by rivers and forests, set before the majestic backdrop of the Alps – the first Vineyard landscape to enter the UNESCO heritage list with Langhe and Roero. On our way to Asti we will visit this area and of course have a taste of its wines. Asti is a gem of Piedmont. Lesser known than other Italian cities, Asti has a century-long history and features a city-centre rich in medieval towers and noble palaces. A walking tour will show you the beautiful well preserved city center of this town.
We then head to Acqui Terme for dinner and overnight.

Today we will head to Turin, a majestic city that leaves nothing wanting: the Cathedral, obelisks, grand squares and boulevards, the Castle, and the Piazza San Carlo are all waiting for you! We will have free time to climb the awe-inspiring Mole Antonelliana or visit the renowned Egyptian Museum.

After breakfast, our day will begin by travelling to Alba, heart of the Langhe, at the center of a landscape of rolling hills and lush vineyards. We will have free time to explore this small town known as “the city of 100 Towers.” We will then move to La Morra and Barolo and visit a traditional wine cellar where our taste buds will rejoice tasting some classic wines and local products.

Day at leisure to enjoy the beautiful center of Acqui Terme on your own. A Typical Piedmontese dinner awaits you the hotel.

Start the day with a guided tour of Cuneo (meaning wedge in Italian), taking you to Galimberti square, to the Cathedral, built on the site of an ancient small church dedicated to Santa Maria. Afterwards, enjoy some free time to indulge in one of the many cafés under the arcades. In the afternoon proceed to the Val Grana, where the Castelmagno Cheese is produced. Castelmagno cheese has ancient origins. It is said it was first produced in the eleventh century, although the first documents referring to it date back to the thirteenth century. Since then, the local cheese factories have been producing it following the ancient traditions.  The flavor and the aroma are strong and intense and it is widely considered as one of the best Italian mountain pasture cheeses. A tasting of this cheese is a must before heading back to the hotel for dinner and overnight.

It is time to say “arrivederci” to Italy and depart with a transfer to the airport or by land and sea with overnights en route back to the UK.

The Gastronomical Gems of Piedmont

Milan and Genoa – The Capitals of Lombardy and Liguria

Performances will be on a Friday, Saturday and Sunday running from June to September 2021.

Prices are based on third place category and upgrades are available upon request. 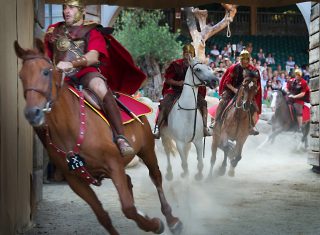