Explore the cultural highlights of the southern Spanish region Andalucia. Discover the wonderful history and architecture of Seville, Cordoba and the remarkable and lavish Alhambra palace in Granada. Furthermore, visit Cadiz and Jerez and explore how the Romans and the Moors influenced Southern Spain.

The jewel of Andalucia, Seville is a fascinating city to discover

The city has a thrilling atmosphere, with flamenco music filling the air, and the locals up for dancing at the drop of a hat. Take the time to wander through the streets and perhaps visit the imposing Cathedral, the largest in the world in the historic Santa Cruz district. Visit the nearby and breathtakingly spectacular Real Alcazar. Additionally, the old palace of Andalucia’s Moorish royals is an ornate masterpiece that will leave you in awe. There is a great range of sights and attractions to explore and visit. During your visit, see the iconic Plaza de España, which adorns many a guide book and the modern ‘Las Setas’.

The city of Córdoba on the river Guadalquivir has a lot more of intimate feel than its modern neighbour, Seville.  Yet there are so many historical treasures here to visit and the gleaming gem is La Mezquita (Grand Mosque). The design, with nearly a thousand arches and columns, is mesmerising. The Torre del Alminar is a 54m-high bell tower. Córdoba has such a fascinating history and was once an important Roman city and a major Islamic centre in the Middle Ages. You can also discover the fascinating history and shows at the Spanish Royal Riding School.

See this fascinating region and discover the cities and cultural highlights of Andalucia. If you’re looking to visit southern spain on a more active tour, why not check out our Hiking in the Sierra Nevada tour.

Make your own way to the airport for your flight to Malaga. Upon arrival, you will be met by your tour manager, who will accompany you throughout your stay in Spain. You will then be transferred to your Seville via Ronda. Enjoy a 2 hour guided tour of Ronda, best-known for its spectacular setting atop a deep gorge spanned by a stone bridge, Ronda has a rich cultural and literary tradition, and is the home of modern bullfighting. Then you will visit Plaza de Toros de Ronda, owned the Royal Cavalry of Ronda, for its history and its architecture it is considered the oldest and monumental Plaza de Toros of Spain. Afterwards, continue on to your hotel in Seville, your home for the next 4 nights.

After breakfast, the coach will take you to south to Arcos de la Frontera to discover Andalucia’s most dramatically positioned pueblos blancos (white villages) on a guided tour. Arcos balances atop a rocky limestone ridge and its whitewashed houses and stone castle walls stop abruptly as a sheer cliff face plunges down to the river Guadalete below. Afterwards continue on Jerez de la Frontera. Jerez is one of Andalucia’s most delightful small cities. Rich in culture and gastronomy, the Cadiz town is famous for sherry, horses and Flamenco. Whilst here, enjoy a sherry tasting and bodega guided tour (Optional). Return to the hotel for dinner.

This morning, enjoy a guided tour of the city of Seville and see sights such as Giralda tower, the Cathedral (entrance included) and the Real Alcázar of Seville. Afterwards, enjoy a leisurely river cruise along the Guadalquivir and see Seville from a unique position and enjoy privileged views of the city. Afterwards, return to the hotel for dinner.

Today, enjoy a free day to explore Seville at your leisure. In the evening perhaps enjoy a Flamenco Night Show with 1 drink included (Optional) – Dinner in the hotel.

This morning, we leave Seville and travel to Cordoba, a city steeped in history and a mixing pot of Spanish history with Islamic, Christian and Jewish influences found in every corner. Enjoy a two hour walking tour with entrance to Mezquita de Cordoba, One of the world’s greatest works of Islamic architecture, the Mezquita hints, with all its lustrous decoration, at a refined age when Muslims, Jews and Christians lived side by side and enriched their city with a heady interaction of diverse, vibrant cultures. In the evening, return to your hotel in Cordoba and enjoy dinner.

After breakfast, we depart Cordoba and travel to Granada. On the way, we will stop off in Baeza and Ubeda for some free time to explore. Located in the province of Jaén, here you will find some of the world’s finest olive oil. The city stands in a vast sea of olive groves, and its cobbled streets boast some of Europe’s best-conserved Renaissance buildings. Along with its sister city Úbeda, it forms part of a World Heritage site. Afterwards, continue onto your hotel in Granada.

Today, we will explore the fantastic city of Granada. A city beaming with an impressive array of heritage with remnants of Islamic world, as well as many Renaissance architectural gems and the most modern facilities, fit for the 21st century. Granada has an unmistakably Moorish flavour, as it was the last city to be reconquered by the Catholic Monarchs in 1492. Fountains, viewpoints and “Cármenes”, houses surrounded by typical gardens of this city, create unforgettable corners in the city. It is no surprise that one of its historic districts, Albaicín, is a World Heritage Site, together with the Alhambra and Generalife. Enjoy a guided tour of the city but also see this architectural gem that is Alhambra and the Generalife (meaning Garden of Architecture). These are both must-see wonders of Southern Spain.

We leave Spain to return to the UK.

Valencia and the Orange Blossom Coast

Magnificent Madrid & the heart of Spain 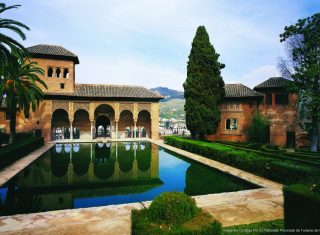