Azerbaijan, the land of contradictions and contrasts

From the dazzling architecture of the cosmopolitan capital to the soaring Great Caucasus Mountains and the sacred sites hidden away in ancient walled cities, this country is a well kept secret nestled in the heart of Eurasia. The nation’s location between two contrasting and distinct continents, has led to a uniquely diverse culture. A seamless blend of East and West, there is a clear European influence combined with a Gulf State flair and a touch of Soviet opulence.

This is one of the fastest changing countries in the world, as showcased in the futuristic architecture and urban developments that line the streets of  Baku, the capital. Away the hustle and bustle of this modern metropolis, surrounded by green pillows of beautifully forested mountains are timeless rural villages that reveal the true Azerbaijan; where ancient customs and traditions still pervade the everyday life of the warm and welcoming locals. Azerbaijan, the “Land of Fire”, is a hidden gem that will charm and perplex any visitor.

Fly from the UK to Baku Airport. On arrival you will be met by an English speaking guide and transferred to your hotel. Check in and relax at the hotel before dinner.

Enjoy breakfast at the hotel and then travel to the Quba region. Krasnaya Sloboda is a unique place in the Caucasus where 3000 Mountain Jews live. This Jewish settlement of Quba has been inhabited by Jews since the 13th century. In 1742, a local ruler named Falikhan gave the Jews, who were being persecuted by Islamic fundamentalists, permission to settle on the left bank of the mountain river Kudiyal-Chay opposite his town. Red roofs, sculpted panels of beige limestone, and rocky cliffs are the distinctive features of the settlement. Today, seven synagogues have been preserved. Later, visit Khynalygh, a small yet miraculous village located at the peak of the Caucasus Mountains and home to an ethnic group of 2000 Khynalyghs. They have preserved the original language, customs and traditions and consider themselves as ancestors of the prophet Noah. Until 2006, the village was inaccessible for nine months of the year, due to poor road conditions. Enjoy a traditional dinner in the village before returning to Baku.

After breakfast, enjoy a tour of the Old City, with its fortress walls, historical buildings and narrow paved streets. Start in Upland Park, located on a hill in the western part of the city. This is the best place to see the city and Baku Bay. Visit the Palace of the Shirvanshahs and the famous Maiden Tower. The bricks under your shoes hold the memory of the city’s history, its fame and glory, its sorrows and sufferings. During the walk you will definitely notice the mix of aromas– the oriental spices and kebabs from the numerous restaurants mixed with the salty and oily odour of the Caspian Sea. Baku is full of energy, it’s beautiful, bright and vivid. It is ready to change but nevertheless follows the traditions of ancestors. Behind the walls the city life sparkles like a melting pot, while in the Old City everything is calm and dutiful as it was for centuries.

Following breakfast, drive to Ivanovka. Ivanovka is a village in the Ismayilly region of Azerbaijan and is the last Soviet collective farm in the country. As soon as you arrive in Ivanovka, it’s clear you’re somewhere different. Many of the locals are blond haired and blue-eyed. Many homes are built in an old Russian village style with timber-sided uppers and red-tile roofs. Most notable are ‘Molokans’, whose nickname literally translates as ‘milk drinkers’. This was originally an 18th-century term of insult over the fact that they would drink milk in Lent (when Russian Orthodox Christians were fasting). The term was later re-interpreted more positively as drinkers of the spiritual milk of God. The Molokans’ particularly puritanical creed eschews smoking, swearing and icons. Rather than churches, their religious gatherings are in unadorned prayer houses that are virtually indistinguishable from other homes. Continue on to the town of Nij, the only place in the world that has had a settlement of Udi people. The forefathers of this ethnic minority, known as the Utis, were members of one of the twenty six Albanian tribes who played an important role in the creation of the State of Caucasian Albania in the IV-III Centuries B.C. Enjoy a traditional dinner in the village.

Explore the majestic city of Sheki, one of the most ancient cities of Transcaucasia. Here you will meet a real Sheki farmer’s family and will get accustomed with the everyday life of Azerbaijani villager. After lunch, drive to Ilisu, a small village built around a single street. The charming old buildings tell the tales of Ilisu’s past: the almost ruined 16th century Sumuggala tower, the 19th century Galaja tower and a well-cared 18th century mosque. Here you can buy genuine honey produced by local beekeepers, have a walk to the waterfall and enjoy samovar tea in an open-air café. Continue on to Lekit, a village said to be over 1600 years old. Explore the ruins of the temple complex (12th Century) and the magnificent natural waterfall. The region is full of thick forests, mountain rivers and castles.

Enjoy breakfast at the hotel before travelling back to Baku via Shamakha. The capital of Shirvanshahs state from the IX century, the town was one of the most important on the Great Silk Road. Visit the famous “Juma Mosque” and the “Diri Baba” mausoleum.

After breakfast, enjoy the morning at leisure to relax at the hotel or explore the city. In the afternoon travel to Gobustan. The reserve is well known for its perfectly preserved rock paintings – petroglyphs – a kind of artistic “archive” of human evolution on Earth. Visit the interactive museum and learn about the nature and the flora of Gobustan. Only a few people know that Azerbaijan ranks the first place in the number of active mud volcanoes. These volcanoes are formations of a cone-shaped hill with a crater in the ground.

After breakfast you will have free time to relax or explore the city before being transferred to the airport for your flight.

If you want to have the weather on your side, plan your trip between April and October. Dry and warm throughout most of the country but between July and August you may find the sun beating down too hard. Winter months are definitely much cooler but it’s also much wetter then. Check the dates for Ramazan – the Muslim month of fasting. It is advisable not to go around then, because fasting means other restrictions too, even in public places.

Visa Requirements:
British passport holders need to apply for a visa to enter Azerbaijan, this can be done online. Provided you meet the requirements you can stay in the country for up to 30 days. Be sure to apply for your visa in good time before you travel.
A group is 10 persons or more. Smaller groups can be accommodated. Picture is for illustrative purposes only. Greatdays Holidays Limited has an ATOL licence (4279) and all of our air package tours are protected under this licence. In the unlikely event of our insolvency, the Civil Aviation Authority will ensure that you are not stranded abroad and will arrange to refund any monies you have paid to us for an advance booking. All the flights and flight-inclusive holidays on this email are financially protected by the ATOL scheme. When you pay you will be supplied with an ATOL Certificate. Please ask for it and check to ensure that everything you booked (flights, hotels and other services) is listed on it. Please see our booking conditions for further information or for more information about financial protection and the ATOL Certificate go to: www.atol.org.uk/ATOLCertificate 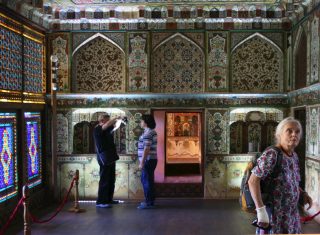