Group Tour Operator for holidays to the Borders, England & Scotland

The Road to the Borders: Gretna, the Lake District and Hadrian’s Wall

On this group tour of the Borders we traverse the border region of England and Scotland, beginning with a trip over the border to Gretna Green and the Devils Porridge Museum in Dumfries and Galloway.

We also venture along Hadrian’s Wall in Northumberland to see the Roman Vindolanda, and take to the water in Cumbria before exploring award-winning Lowther Castle.

On the outskirts of the Scottish border town of Gretna and across the river from the English county of Cumbria, Gretna Green is best known as the destination of eloping couples. The Famous Blacksmiths Shop features a number of shops and places to eat as well as recreations of a blacksmith’s forge, marriage rooms and tales of past scandals and elopement.

Shortly to the west is the Devil’s Porridge Museum on the site of the old HM Factory Gretna. Built to address Britain’s 1915 ‘shell crisis’ in which soldiers fighting in France found themselves short of ammunition, the factory was the world’s largest munitions factory during the First World War.

Exhibitions explore stories of the 12,000 women who travelled from across the UK to aid production as well as tales from the Solway Military Coast from WWII and beyond. The museum takes on the term Devil’s Porridge, coined by Sir Arthur Conan-Doyle after witnessing the production of the volatile mixture used in the bombs.

The steamer cruise on Ullswater Lake gives opportunity to marvel at some of the Lake District’s most impressive sights. The second largest lake in the region after Windermere, Ullswater is flanked by the ridges of Helvellyn.

Near Penrith, Lowther Castle offers up a haunting beauty. The newly-renovated gardens contrast the ruinous castle, which fell into disrepair after WWII, offering a ghostly mix of austere and splendour.

Reaching 73-miles across Britain’s neck from the Solway Firth to the mouth of the Tyne, Hadrian’s Wall separated Roman Britain from the Scottish Picts. Named for Emperor Hadrian upon whose orders it was built between AD 122 and 128, the wall ties together 80 Roman forts in a truly impressive feat of ancient engineering.

Among its many nearby garrison towns is Vindolanda fort. Site of impressive reconstructed turrets and a temple, Vindolanda also hosts an ever-growing time capsule museum as more and more of the town, once lost to the soil, is uncovered.

Beyond the old Roman village of Corbridge – the oldest fortified site in the region, predating the wall by some 40 years – is the magnificent Hexham Abbey. A classic piece of early English architecture, Hexham Abbey highlight certainly must be its 7th century Saxon crypt.

Travel to your hotel in the Borders area

Today we say ‘I do’ to a trip over the border to Gretna Green, where we will hear stories of runaway romance at the famous Blacksmiths Shop Museum.

Next is the Devils Porridge Museum, where we discover what life was like for the thousands of Munitions Girls who flocked to work at HM Factory Gretna, the largest munitions factory in the world during the First World War.

Next is Lowther Castle and Gardens, a magnificent Gothic ruin recently renovated from a derelict shell into an award winning visitor experience. Our visit starts in the stunning courtyard, home to a café, shop and the Story of Lowther exhibition. The exhibition leads you into 130 acres of gardens, with vast lawns, planted Castle ruin, Rose Garden and Lake District views.

Today, a Blue Badge Tourist Guide joins the coach to reveal the stories of the Romans and the Vikings. We follow the ‘Military Road’ that shadows Hadrian’s Wall and we visit Roman Vindolanda, a world-famous collection of artefacts.

In the afternoon our journey takes us through the Roman town of Corbridge to visit Hexham, where we enjoy a guided tour of Hexham Abbey.

The Lakes and Scenic Trains 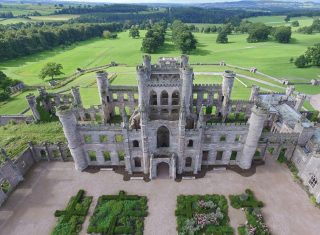