See one of the most beautiful capitals of Europe; Budapest

A city where no superlative does it justice, Budapest is one of the great European destinations. There truly is something for everyone. After years of economic and social neglect, the people of Budapest took back this Imperial City after the devastation in the Autumn of 1956. Since then reconstruction and inner-city building work took place and soon after the city became a treasure trove architectural, cultural and historical gems. With the first underground railway in Europe being built here and the Danube providing a natural transport route, it is easy to get around the city.

Budapest; A City of Two Halves

Standing proudly on the banks on the mighty Danube, the Hungarian capital, Budapest, is a city of two halves. ‘Buda’ with Castle Hill is a UNESCO World Heritage Site. The larger ‘Pest’ is home to the Parliament, Heroes’ Square and Andrássy Avenue. The whole city is a delight for the eyes – with architectural highlights from throughout history and impressive monuments on every corner. While you walk across the famous Chain Bridge, look out for the incredibly detailed lion sculptures which guard each side. The bridge was the first link for the two halves of the cities and didn’t open until 1849.

A City of Water including Europe’s Second Longest River; The Danube

The Danube was once a long-standing frontier of the Roman Empire, and today flows through 10 countries, more than any other river in the world, however it is here in Budapest where it cuts the city in half. A cruise on the Danube by night offers a perfect opportunity for a different view of this stunning city! As well as this, Budapest is blessed with an abundance of hot springs and the array of thermal baths are a cultural gem left by the Romans.

Despite the Darkness, Hope and Innovation light a city

Hungary and in particular the people of Budapest have suffered greatly over the last century. Walk along the banks of the Danube and take a moment to reflect at the ‘Shoes on the Danube Bank’ Memorial. With 60 pairs of shoes made out of iron, it provides a sombre point to remember Budapest’s history. One can see the bullet holes and shrapnel pockmarks on buildings from WWII and the 1956 Uprising, non more clearly than in the finely kept ruins bars. So innovative and creative are the people of Budapest, these bars have been set up inside dilapidated pre-war buildings and are a cultural hot spot for tourists and locals alike. However, it’s not just business that grew out the darkness, the arts certainly flourish in Budapest as well. There are more pioneering Hollywood film makers from Budapest than from any other European city. Hungary’s two most celebrated composers – Béla Bartók and Zoltán Kodály – lived in Budapest and not forgetting one of greatest footballers to ever play the game, Ferenc Puskás was born in this great city.

With so much to see, we truly recommend a trip to this beautiful city. During your time in the city, perhaps board one of the classic yellow trams to quickly move around or hop on one of the sightseeing buses to see the highlights. Additionally, climb Castle Hill for some fabulous photos looking back towards historic Pest.

Discover medieval Buda on the western bank of the Danube, the hill-top half of the city. Taking the historic funicular is a great way to ascend Castle Hill, full of cobbled streets and colourful buildings. At the top you will find buildings telling of the varied histories of the city, including the Royal Palace, dating from 1265, the stunning St Matthias’ Church and Fisherman’s Bastion as well as the Hospital in the Rock bunker museum. Photos of the views pale in comparison to the breathtaking reality as you look out from Buda, over the Danube, towards the stunning Parliament building on the opposite bank.

The imposing, iconic Hungarian Parliament building, one of the most striking sights of the city, was only completed in 1904. Tours can be arranged around this fascinating building. The Jewish Museum and Synagogue tells the haunting story of the deportation of thousands of the city’s Jewish inhabitants, whereas the Hungarian State Opera House tells of the opulent might of the Austro-Hungarian Empire. Other highlights include the National Bank, Stock Exchange and Soviet Memorial as well as the imperial era buildings on Ándrassy Street.

The impressive River Danube once divided this city into Buda and Pest. Chain Bridge, a spectacular suspension bridge opened in 1849, was the first permanent link over the river. Perhaps take a cruise along the Danube to view the city from a different perspective or discover Margaret Island in the middle of the river. There are a number of options for cruises including sightseeing crises by day and night, lunch and dinner cruises.

In the middle of the Danube and reached by the Margaret Bridge, this park-filled island provides a tranquil retreat from the hustle and bustle of the city. Explore the small zoo, relax with a picnic or simply explore the parks at your leisure. The Water Tower can be climbed for a fabulous viewpoint over the river and city.

Famous since Roman days for their healing properties, Budapest was built on a number of natural, thermal springs. Opulent hotel-spas offer the possibility to immerse yourself in the warm waters, with indoor and outdoor pools, massage rooms and plunge pools.

Around an hour and a half drive out of Budapest you find Lake Balaton, the greatest ‘inland sea’ in Europe. Extending almost 80km, it is known for its thermal springs and chic resorts, including Héviz, Hungary’s most famous spa resort, on the southern edge as well as the wine growing areas and historic villages of the north shore.

Inspected by Greatdays staff in February 2018

Situated in the centre of Budapest close to the metro, Astoria is a traditional hotel. The rooms are elegant with antique style furniture and have minibar, safe, TV, telephone, air conditioning and hairdryer.

This centrally-located hotel is 5 minutes’ walk through the park from the Castle District. There are two restaurants serving international and gourmet Hungarian specialities. Standard rooms have airconditioning, bathtub, minibar, TV, radio and telephone.

Located only 400m from the Opera House in the heart of Budapest. The hotel offers rooms with a TV, telephone, free Wi-Fi. Enjoy a buffet breakfast each morning and why not enjoy a drink in the bar in the evening.

Czech It Out! – Prague and Bohemian Explorer

A nighttime view of the Chain Bridge in Budapest, Hungary ©Blumen 1983 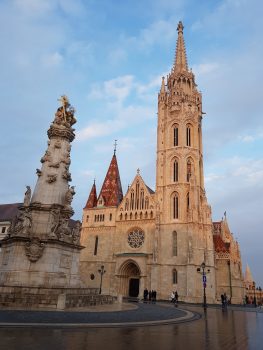