Despite being nestled in the heart of the continent, Paraguay is overshadowed by its neighbours and consequently overlooked as a travel destination. However this means that this small undiscovered and unspoilt country can offer visitors the true South American experience. Rustic yet sophisticated, this beautiful country is a hidden gem. Paraguay’s energetic capital and largest city, Asuncion, is built on unassuming hills above the east bank of the Paraguay River. Get off the beaten track and experience the sweeping savannahs, shimmering lagoons and the impressive Jesuit ruins, hidden away in traditional, rural towns. Discover exotic reserves, the spectacular Monday Falls and the isolated Mennonite colonies in a country that is becoming the fastest growing travel destination in the world.

Arrive at Asuncion International Airport. On arrival, you will be met and transferred to your hotel.

Enjoy breakfast at the hotel and afterwards depart for a full day tour – a combination of handcrafts, culture, history and nature. Visiting the artisanal city of Ita, traditionally know for making the “Gallinita de la Suerte”, a small chicken made of clay, used as a lucky charm. Then continue to Paraguarí followed by Sapucai, the city of the railway. After this, visit Piribebuy and Caacupe before moving on to San Bernardino, located right by the side of the famous Ypacarai Lake. On the way back to Asuncion, stop off in the city of Itaugua, famous for its fabric handcraft.

After breakfast, get to know the nation’s capital, Asuncion. Nicknamed the “Mother of Cities” Asuncion is one of the first cities in South America to be founded by European explorers. The city is a colorful combination of modern and colonial architecture. Explore areas such as Independence House, the National Cathedral, the Government Palace, the Railway Station, the National Heroes Pantheon and Mariscal Lopez Avenue known as Avenue of the Embassies. End your tour in the popular artisan market, La Recova. Transfer to Central Chaco, arriving in time for dinner.

Gran Chaco – Step in to the wild

The word Chaco means “abundance of wildlife” and Gran Chaco more than lives up to its name: conditions are ideal for nature lovers and anglers. Depart early for a full day of bird watching in Campo Maria and its surroundings, also visit the Salty Lagoon, full of birds and other mammals and you may even spot some big cats.

Central Chaco – Home to the Mennonites

This morning, you will visit the great Mennonite colonies and producing cooperatives of the region. The Chaco is a remarkable area consisting of an almost featureless plain, with a substantial population of Indigenous people. Their only paved highway, Route TransChaco, leads to the religious community of Filadelfia, where Mennonites settled in the late 1920’s.

Transfer to Encarnacion, visiting Yaguaron and San Ignacio Jesuitic Museum en route. Yaguaron is known for its large baroque church and fine Franciscan missionary carvings. In the main square of the city there is a statue of the beatified Roque Gonzalez, showing how important the priest was to the development of the mission. The 12 Stations of the Cross line a pleasant path up the hill behind Yaguaron to a small chapel – from here there is an amazing view of the surrounding countryside.

Transfer to Ciudad Del Este visiting the Jesuit Missions of Trinidad del Paraná and Jesus de Tavarangué en route. It was declared a World Heritage Site in 1993 by UNESCO. In addition to their artistic interest, these missions are a reminder of the Jesuits’ Christianization of the Rio de la Plata basin in the 17th and 18th centuries.

Enjoy breakfast and depart early for a full day visit to Monday Falls National Park with a wonderful panoramic view of the waterfall. 45 meters tall and approximately 120 meters wide the falls are truly breathtaking. The name “Monday” (pronounced “mon-da-ugh”) originates from Guarani language and means: “robbed river”. In the afternoon visit the Itaipu Power Dam (Paraguayan side), the largest dam in South America. With more power than 10 nuclear power stations it has supplied the second largest city on the planet with zero-emission electricity since 1984.

Breakfast and time at leisure until your transfer back to Asuncion airport for your flight home.

The absolute best time to visit Paraguay is during the dry (winter) season, from May to September. The temperature is comfortable and the humidity is lower than in the summer season. Wintertime is the peak tourist season of Paraguay, most festivals are hosted during this period.
It can be advisable to avoid visiting Paraguay during the summers season (October to April). During this season high temperatures and humidity is recorded, the country also receives the most rainfall of the year.

Visa Requirements:
British Citizens do need a visa to visit Paraguay, you will usually be allowed to visit for 90 days. On arrival your passport must be stamped, this applies for entering Paraguay by air and by land.
The tour will run with a minimum of 10 passengers. A group is 10 persons or more. Smaller groups can be accommodated. Picture is for illustrative purposes only. Greatdays Holidays Limited has an ATOL licence (4279) and all of our air package tours are protected under this licence. In the unlikely event of our insolvency, the Civil Aviation Authority will ensure that you are not stranded abroad and will arrange to refund any monies you have paid to us for an advance booking. All the flights and flight-inclusive holidays on this email are financially protected by the ATOL scheme. When you pay you will be supplied with an ATOL Certificate. Please ask for it and check to ensure that everything you booked (flights, hotels and other services) is listed on it. Please see our booking conditions for further information or for more information about financial protection and the ATOL Certificate go to: www.atol.org.uk/ATOLCertificate 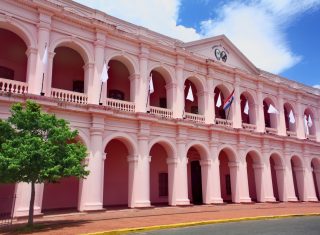