For those who looking to escape the touristic hot spots of Veneto, Tuscany and Campania, look no further than than the incredible region of Puglia (Apulia). This has to be one of the most beautiful and scenic areas in the Mediterranean. Discover the ancient remnants of bygone eras and relax in the tranquil bays the heel and arch of Italy.

Lecce; “The Florence of the South”

The beautiful city of Lecce, is considered a must see in the region of Puglia. This graceful city has been cultivated over thousands of years and it is fair to say the Ancient Greeks left their mark on this city. Quintus Ennius, considered “the father of Roman Poetry”, was one who sought inspiration from Greek culture and transformed an empire from his native Lecce. To this day, in the Grecìa Salentina, a group of towns not far from Lecce, the griko dialect is still spoken. It is not surprising the greeks took such a shine to this region as it is truly fascinating. Nowadays, you find some upmarket boutiques, decent Pugliese restaurants but the main draw is the stunning architecture, so profound that it received its own name; Lecce Baroque (barocco Leccese). Many consider Lecce to be one of the hidden gems in Italy and has been named “The Florence of the South”, endearing as it is to describe the city’s beauty, it may be an injustice when describing the city’s uniqueness.

The Seaside resorts and spectacular scenery of Puglia

Puglia’s location on the southern tip of Italy on the Adriatic, lays way for some beautiful beaches, tranquil waters and wondrous hills. Otranto, a coastal town is home to beautiful picture-perfect blue waters and plenty of diving rocks. Nearby beaches include the popular Alimini Beach and the Baia dei Turchi. At the harbour, Torre Matta tower has sweeping sea views. Also, on a clear day, it is possible to over the Strait of Otranto to Albania.  Further up the coast past Lecce and Brindisi is the town of Polignano a Mare. Known for beaches like the white-pebble Lama Monachile, also known as Cala Porto. The town is perched atop a 20 metre-high limestone cliff above the crystal clear waters of the Adriatic, Polignano a Mare offers breathtaking views of the beautiful Adriatic Sea and coastline.

Alberobello; Trulli a UNESCO sight to be seen

Alberobello a UNESCO World Heritage town is truly unlike anywhere else. It’s known for its Trulli, whitewashed stone huts with conical roofs. These are built from the limestone found in the area and are thought to have been built in the 14th Century. The buildings are now home to many different outlets includingg trullo bars and trullo shops. However it is in the Piazza del Popolo, high above the town, where the Belvedere Trulli lookout offers fabulous views across the tight streets and hundreds of Trulli buildings.

With many cities, towns and stunning beaches waiting to be explored,  Puglia is a destination for everyone.

On arrival at Bari/Brindisi Airport, transfer to your hotel in Alberobello for 7 nights.

Today, after breakfast, enjoy a half day excursion to Ostuni. Rising high above the vast olive-carpeted plateau of the lower Murgia, Ostuni has long been an awe-inspiring sight for those travelling across Puglia. Strong defensive walls and tumbling clusters of white-washed houses wind around the hillside, at the top of which, proudly surveying the surrounding land, sits the magnificent Gothic cathedral. Enjoy a half day guided tour of the city before returning to the Alberobello for evening meal at the hotel.

Enjoy a free day to explore Alberobello at leisure. Alberobello a UNESCO World Heritage town is truly unlike anywhere else. It’s known for its Trulli, whitewashed stone huts with conical roofs. These are built from the limestone found in the area and are thought to have been built in the 14th Century.

Today, enjoy a full day transfer to Grottaglie and Locorotondo. Amidst the low hills and limestone ravines of northern Puglia, Grottaglie stands out for its dedication to its historic craft – ceramics. Then travel to Locorotondo, a town that takes the name from its circular shape.

Discover one of the most beautiful cities in Italy with many palaces, churches and the remains of a Roman amphitheatre; Lecce. Enjoy a guided tour of the city before travelling to Otranto. Otranto is located on the eastern tip of the ‘heel’, whose 15th century walls surround a pedestrianised historic centre. It is also a lovely seaside resort with a fishing harbour and promenade.

Trani, where you can see the cathedral of San Nicola Pellegrino. Continue towards Castel del Monte is one of Puglia’s most impressive fortresses with its eight towers built in a perfect circle.  Arrive at the Torrevento Winery at Corato near Trani for a visit, tour and presentation on the wine-making process with 3 x wine-tasting and delicious local snacks

Day at leisure in Alberobello

Today, enjoy the hotel facilities and explore this fantastic town a bit mroe before having a 3 course Farewell Dinner in the hotel restaurant, excluding drinks.

Transfer to Bari/Brindisi Airport for the return flight to the UK.

The Heart of Italy and Rome 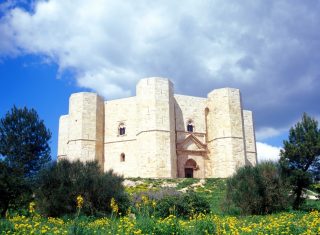