Bulgaria is a country with thousands of years of history and a cultural heritage that embraces ancient civilisations. The country’s cities are a delight to explore – from dynamic and cosmopolitan Sofia to the architectural treasures and Roman remains of Plovdiv and the maritime town of Varna.

Sofia; The youthful, yet Ancient Capital of Bulgaria

Often overlooked for the sunnier climate of the nearby beach resorts, Sofia is actually a treasure chest of historical jewels scattered amongst the vibrant landscape of the Bulgarian capital. The youthful and modern feel of the post-iron curtain era has brought with it some of the finest museums, galleries and restaurants. However, due to its prime location, in the centre of the Balkans, and being midway between the Black Sea and the Adriatic Sea, as well as being close to the Aegean Sea, the identity of Sofia has been manipulated and shaped by invaders over thousands of years. These invaders have left their architectural mark and you would struggle to find Ottoman mosques, Soviet monuments and a treasure trove of Roman ruins from nearly 2000 years ago, all in one place.

Plovdiv; Bulgaria’s Best Kept Secret and One of the oldest cities in Europe

Like Sofia, the Romans left their mark in Plovdiv. However, excavations were not necessary to find remnants of this empire. In the cultural melting of pot of Plovdiv’s old Town, one can see the magnificent ancient Amphitheatre, built in the second century AD by Hadrian’s predecessor, this partially renovated theatre is still used today by the performing arts. Monuments of various civilisations are a step apart across this city and Like Rome, Plovdiv boasts seven hills. None more ancient than Nebet Tepe hill, an ancient village, from the seventh century BC where the Thracian’s built one of the oldest urban settlements in Europe. Due to Plovdiv’s location in central Bulgaria, the city was commonly used on the route to Greece or Turkey and has always been one of Bulgaria’s wealthiest and most cosmopolitan. With its art galleries, winding cobbled roads and bohemian cafes and restaurants, it is clear to see why Plovdiv was named European Capital of Culture in 2019.

Golden Varna; A Maritime city on The Black Sea

This city is too packed with history and is home to the famous “Gold of Varna”, a 6,000-year-old Thracian jewelry, considered yo be the oldest gold treasure objects ever discovered, was found in this city and is displayed inside the Archaeological Museum, along with Greek, Roman and Ottoman antiquities. As well as this, Varna is home to Bulgaria’s largest Roman baths complex. These were the biggest on the Balkan Peninsula. The sheer size makes it all the more impressive and it is well worth a visit to this remarkable monument of ancient architecture. However, this city is also a thriving, modern seaside resort. With it’s long, golden beaches straddling the Black Sea, there is plenty of space to relax and take in the Bulgarian sun. Also, you will find the city centre to be a hub of cultural activity with many restaurants, bars and cafes creating a vibrant atmosphere for holiday makers and locals alike.

Bulgaria’s beauty does not stop at its beaches. Given the country’s remarkably picturesque mountains and the thriving ancient cities, maybe it’s time to see the best of Bulgaria.

Fly directly from the UK to Sofia where you will be met by an English speaking guide who will remain with your group throughout the itinerary. This afternoon, you will be shown the highlights of the city of Sofia, the largest city in Bulgaria.

Travel towards Troyan where your tour begins at the Troyan Monastery, within the complex is the main church ‘The Assumption of the Virgin Mary’. Afterwards, you’ll visit the Tsaravets Fortress in Veliko Tarnavo.

Travel to the village of Arbanassi, home to the Church of the Nativity of Christ. Continue to Schumen where you’ll visit the Fortress and the Sherif Halil Pasha Mosque. Afterwards, see the Madara Horseman before a stop at the Stone Forest Pobiti Kamani.

Morning sightseeing tour of Varna including the Orthodox Cathedral followed visit to the Varna Archaeology Museum. Afterwards, travel to the ancient town of Nessebar, home to a number of impressive churches before heading to Kazanlak.

Visit the Museum of Roses in the Rose Valley, famous for its rose growing industry and the Thracian Tomb. Continue to Bachkovo Monastery, one of the oldest Eastern Orthodox Monasteries in Europe.

Morning sightseeing tour of Plovdiv including the Church of St Constantine & Elena, the Ancient Roman Theatre and the Old Mosque. Continue to the town of Koprivshtiza, an architectural and historical reserve with over 300 architectural, historic, and artistic monuments.

This morning, travel to the Monastery of Saint Ivan of Rila, better known as the Rila Monastery. Returning to Sofia, visit the National History Museum of Sofia before visiting Boyana Church.

Free time this morning before being transferred to the airport for your return flight to the UK.

We have a wide selection of 3* and 4* hotels to suit your budget.

Dracula’s Romania: Take a Bite out of Transylvania 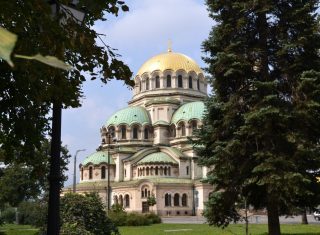