For a perfect blend of awe-inspiring nature, history and mythology, there are not many better destinations than Romania and Bulgaria in the Mountainous south-west of Europe. Both countries are cultural melting pots with Greek, Slavic, Ottoman, and Persian influences, the a rich heritage of traditional dance, music, and crafts can be seen all over the countries.

Bulgaria; one of the oldest states on the European continent

Bulgaria is a country with thousands of years of history and a cultural heritage that embraces ancient civilisations. The country’s cities are a delight to explore – from dynamic and cosmopolitan Sofia with its beautiful parks, and massive cultural melting pot. The city’s landmarks reflect more than 2,000 years of history, including Greek, Roman, Ottoman and Soviet occupation. Like Sofia, the Romans left their mark in Plovdiv. Monuments of various civilisations are a step apart across this city and Like Rome, Plovdiv boasts seven hills. None more ancient than Nebet Tepe hill, an ancient village, from the seventh century BC where the Thracian’s built one of the oldest urban settlements in Europe. Due to Plovdiv’s location in central Bulgaria, the city was commonly used on the route to Greece or Turkey and has always been one of Bulgaria’s wealthiest and most cosmopolitan.

Romania and the heart of Transylvania

The tour begins in Romania’s capital city, Bucharest. It boasts interesting museums, wonderful parks and trendy cafes. While much of the centre is modern and garish, history is tucked away in quiet corners. Explore the Old Town’s splendid 17th- and 18th-century Orthodox churches and graceful art nouveau villas. Also, in Romania, discover the breathtaking Carpathian Mountains, the medieval city of Sibiu and Peles Castle. A visit to Romania would not be complete without visiting Transylvania, Dracula’s ‘birthplace’ Sighisoara and his ‘home’ at Bran Castle. Transylvania is a tapestry of picturesque scenery, quaint villages and crumbling citadels. The towns of meandering cobblestone streets and medieval towers fulfil fantasies of Romanian beauty. From the stony lanes and pastel-hued buildings of Sighisoara –  the medieval citadel where Vlad the Impaler (Count Dracula) took his first steps.

To see these fascinating treasures of Southern Europe and nations whom may not have been explored as extensively as their Balkan counterparts. Visit the untamed landscapes of Bulgaria and Romania on this tour encompassing these great nations.

Fly directly to Sofia where you will be met your English speaking tour guide and transferred to your centrally located hotel. Subject to fight arrival time, you will begin a tour of the city of Sofia, the Bulgarian Capital City. In the heart of Sofia, you can admire the temple of St Nedelya, the mosque of Banya Bashi, the famous Synagogue, the Catholic Cathedral of St Joseph, the Orthodox Cathedral of St Alexander Nevski and much more. This evening you will enjoy dinner at a local restaurant with folklore entertainment and traditional fire dances.

This morning, travel to the Rila Mountains, where you will visit the famous Rila Monastery. The beautiful Orthodox monastery was built in the 14th century and houses a whole collection of valuable paintings, thousands of manuscripts, old printed books and masterworks of wood carvings. From here, the tour will continue to Plovdiv, one of the oldest towns in Europe. During the city tour you will discover sites such as the Ancient Roman Theatre, the Roman Odean, the Roman Forum, the Roman Stadium and more. Check into hotel for dinner and overnight stay.

Travel towards Kazanlak, which is famed for it’s rose growing industry. After a visit to the rose oil centre, the tour will continue with a scenic ride towards Schipka Pass and then to the Etar Museum. This museum is an outstanding open air village museum, where you you witness the architecture and lifestyle of the local people during the 18th and 19th centuries. Transfer to Veliko Tarnovo, check into hotel for dinner and overnight stay.

Discover the medieval capital of Bulgaria, Veliko Tarnovo. The city has a history dating back over 5000 years. Visit the Tsaravets fortress and the church of St Demetrius. In the afternoon, the tour will continue towards Bucharest, the capital city of Romania and the sixth largest capital in the European Union. The city tour in Bucharest will take you to the most important sites such as the Arch of Triumph, the Victory Square, the Roman Square and the Unification Square. Time at leisure in the old town and dinner at a traditional restaurant with local entertainment. Overnight in Bucharest.

Following breakfast, we cross the breathtaking Carpathian Mountains, travelling towards Transylvannia. We arrive at the city of Sibiu around lunchtime. The city of Sibiu is listed by Forbes as being in the top 10 most idyllic places to live in the world. This wonderful city has been well preserved since medieval times. The walking tour starts at the Grand Square where you will find the Catholic Church, the City Hall and the Brukenthal Palace. You’ll have some free time in the old town. Dinner and overnight stay in Sibiu.

Transylvannia is famous for its castles, legends and fortified churches. This morning you will travel through small and pretty villages towards Biertan, where you will visit the largest fortified church built by German Saxons in Transylvannia. We will arrive into Sighisoara around lunch time – the town is famous as being the birth place of Count Dracula. During your walking tour, you will visit the Clock Tower, the birth place of Dracula and the Church on the Hill. Transfer to Brasov for dinner and overnight stay.

This morning you will visit the most famous castle in Eastern Europe – Bran Castle or alternatively known as “Dracula Castle”. The castle was built by the German Saxons in the 14th century and served as customs for many centuries between Transylvania and Wallachia. In the afternoon you will take a city tour of Brasov which includes landmarks such as the Black Church, the Old City Hall and the First Romanian School. You will have some free time to explore the medieval town. This evening, you will enjoy a traditional evening meal at a local restaurant complete with wine tasting and a folklore show. Overnight in Brasov.

Before leaving Romania, you will visit the most beautiful castles in the world – Peles Castle. The castle was built at the end of the 19th century by the German King Carol I and served as the summer royal residence until 1947. Today the castle is an outstanding museum preserving the original furniture and decor. Afterwards, you will be transferred to the international airport in Bucharest for your return flight to the UK.

Dracula’s Romania: Take a Bite out of Transylvania

The Heart of Greece – A Discovery of the Ancient Classics 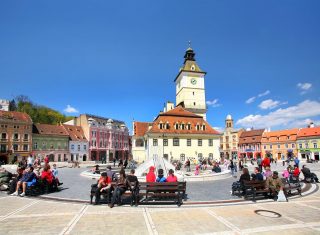